(NEW YORK, NY) Saying that the NYPD is flouting the law by permitting its officers to access sealed arrest records, The Bronx Defenders and Cleary Gottlieb Steen & Hamilton LLP today asked a court to issue an order directing the NYPD to stop using sealed arrest information and to make public the training documents the NYPD has claimed are confidential.

“The NYPD is flouting a decades-old civil rights law to unlawfully target and surveil predominantly Black and brown people,” said Niji Jain, an Impact Litigation attorney with The Bronx Defenders. “People have a right not to be punished for dismissed arrests, but unless we get this court order the NYPD will go on violating that right for millions of people while it continues to drag its feet in producing documents that demonstrate its disregard for the law.”

Today’s filing is the result of a request for legal documents, known as discovery, in the class-action lawsuit against the City of New York and the NYPD for illegally using and sharing information from sealed arrest records in defiance of long-standing laws that protect privacy and the presumption of innocence.

In addition to seeking an injunction to prohibit the NYPD from using sealed arrest information and relying on these trainings, the motion asks the Court to make these trainings public by rejecting the NYPD’s designation of them as confidential.  This is the NYPD’s second attempt to hide the training material. Previously, the City tried to keep presenter notes in certain training presentations from plaintiffs’ counsel, baselessly arguing the attorney-client privilege applied. In an order rejecting that argument and compelling full disclosure of the training documents, Justice Lyle K. Frank of the New York State Supreme Court noted, “As the NYPD’s policy on dissemination of sealed records (or lack thereof) is central to this case, the impetus for these documents to be discoverable far outweighs any possible confidentiality.”

The legal papers filed today set forth the stakes of the case: “Given that the NYPD admits that it maintains over six million sealed records relating to more than 3.5 million people in at least fourteen interconnected databases that are accessible to NYPD personnel, these instructions represent a significant, imminent, and ongoing risk that the class members’ rights will be violated in a manner that will be difficult to remedy after-the-fact.  And this is a violation of rights that primarily affects people of color:  The vast majority of the records at issue concern Black and brown people.”

The court is expected to rule on the motion for a preliminary injunction in the next few months. If granted, the injunction will require the NYPD to make significant changes to its daily operations and multiple databases, The Bronx Defenders said. 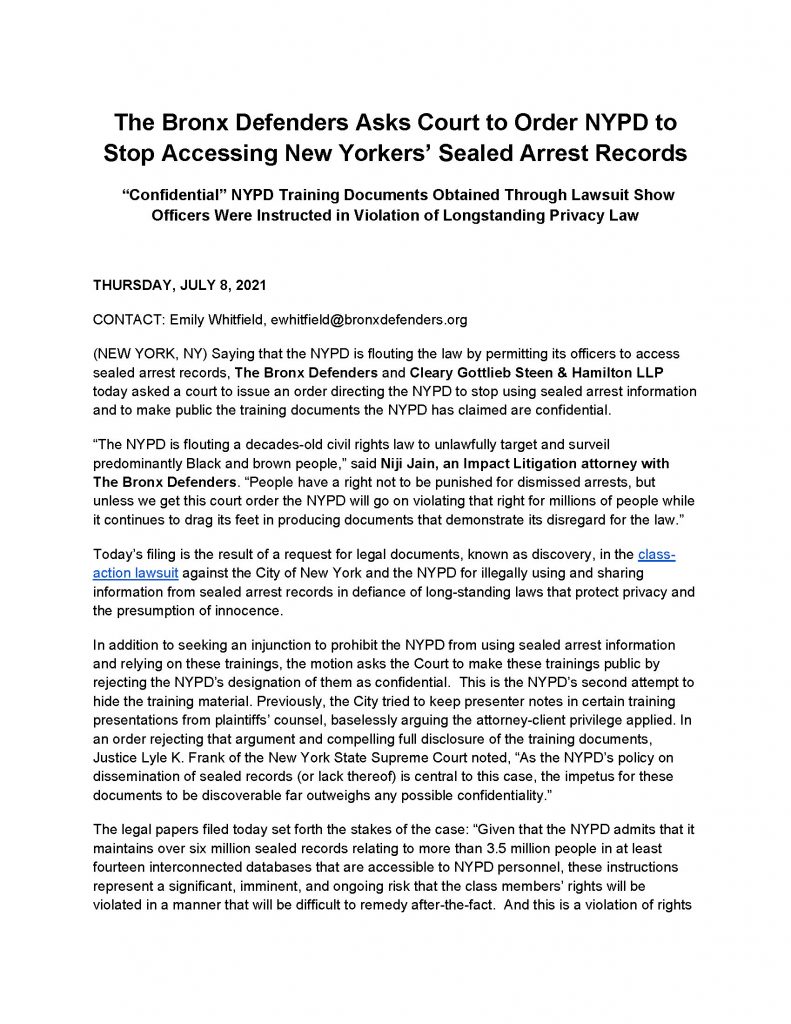