BRONX, N.Y. — Three New Yorkers represented by The Bronx Defenders and Cleary Gottlieb Steen & Hamilton LLP filed a class action today against the City of New York and the NYPD for illegally using and sharing information from sealed arrest records in defiance of long-standing privacy laws. The NYPD’s practice violates the rights of thousands of people, and subjects anyone who has been arrested but not convicted of the crime—predominantly Black and Latino people—to stigma, surveillance, and harsher punishment on the basis of mere allegations.

Under New York’s sealing statutes, arrest records on file with the NYPD that do not result in criminal convictions must be sealed and not disclosed to anyone. Mugshots and fingerprints from the arrest must be destroyed or returned to the person accused. In order to access sealed arrest records, the NYPD must first demonstrate to a court of law that the interests of justice require unsealing.

The NYPD ignores that requirement and routinely uses sealed arrest records for criminal investigations, shares the records with prosecutors, and even provides information about sealed records to the press — all without court permission. This class action seeks a declaration that the NYPD’s use and disclosure of sealed arrest records is unlawful and a court-ordered remedy that ends the practice.

The Scope of the Problem

The NYPD collects massive amounts of data about every person it has arrested and it maintains a network of databases that store and disseminate the arrest information it collects. Arrest records can contain sensitive information including names, photographs, addresses, arrest charges, Social Security numbers, fingerprints, and contact information for the person arrested, as well as information about that person’s relatives and acquaintances. In the last four years, the NYPD effected over 1 million arrests; as a result, over 1 million records filled with personal information were uploaded into NYPD databases. Between 2014 and 2016, the NYPD collected personal information from at least 820,000 total arrests and more than 400,000 of those are arrests that should be sealed.

Much of the NYPD’s arrest information is obtained through aggressive policing of low-level offenses — a tactic known as “broken windows” or “quality of life” policing. Of arrests that resolved between 2014 and 2016, 70% were for misdemeanors, and more than 300,000 of those arrests did not result in a criminal conviction and should be sealed.

The NYPD’s practice of using and disclosing sealed arrest records has caused hundreds of thousands of violations of the law. 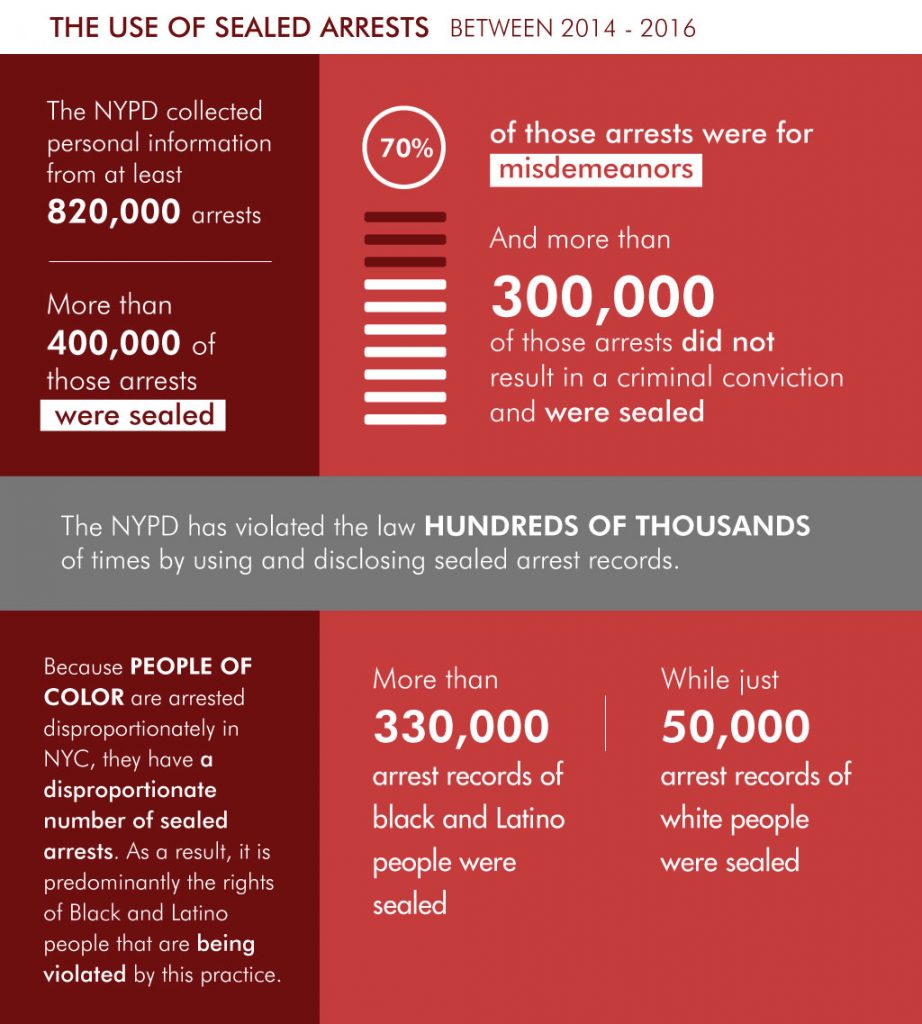 The Impact of the Practice

The NYPD’s unlawful practice primarily harms people of color. Because people of color face a disproportionate number of arrests in New York City, they also have a disproportionate number of sealed arrests: from 2014 to 2016, there were more than 330,000 arrests of black and Latino people that were sealed, compared to 50,000 such arrests of white people.

“The NYPD’s arrest dragnet has built a massive database that marks people for life even after they face the bar of justice and are not convicted of a crime,” said Jenn Rolnick Borchetta, Deputy Director of The Bronx Defenders’ Impact Litigation Practice. “The NYPD’s use of sealed records violates a law that protects privacy and the presumption of innocence. We seek to enforce the law and end an NYPD practice that places people of color at risk of heightened surveillance and harsher punishment based merely on allegations.”

One of the plaintiffs is a 24-year old Latino man who had earned his G.E.D, worked as a restaurant shift manager, and was planning to attend college — until the NYPD’s unlawful use of his sealed records pushed his plans off track. In 2015, he was in Connecticut when two men allegedly robbed a livery driver in the Bronx. The NYPD created a photo lineup using a photo of the plaintiff from an arrest that had been dismissed years earlier, even though that arrest was sealed and the law required the NYPD to destroy that photo immediately upon dismissal.

During the year and a half that the plaintiff was forced to fight those charges, he moved from his lifelong home an hour outside the City to the Bronx to make his repeated trips to court easier. He lost his job and gave up his plans to go to college. Despite the fact that he was innocent, he began to feel like a criminal and experienced emotional distress, fear, and anxiety. The charges against him were ultimately dismissed on the prosecutor’s recommendation. The NYPD continues to maintain, use, and disclose the plaintiff’s sealed information.

“New York’s sealing statutes were enacted to protect individuals from suffering adverse effects or being stigmatized by an arrest if the criminal charges they face are ultimately dismissed,” said Jonathan Kolodner, a partner at Cleary Gottlieb. “The NYPD’s continued use of sealed arrest records violates both the letter and spirit of the law, and, with this lawsuit, we aim to vindicate the rights of those whose privacy has been violated by this practice and prevent this infringement from continuing.”

Cleary Gottlieb Steen & Hamilton LLP has been a leader in the legal profession for more than 70 years. Our 1,200 lawyers, who operate in 16 offices in major global financial centers, work together across practices, industries, and jurisdictions to provide clients with clear, actionable approaches to their most complex legal and business challenges. Learn more about us at www.clearygottlieb.com.